History of the Moray Badge

Gordonstoun’s archivist, Louise Avery, has researched the history of the Moray Badge:

The Moray Badge was established in 1936 as a result of Kurt Hahn’s belief, when he founded Gordonstoun School, that modern society was in an unhealthy state.

He specified four symptoms of this sick society:

Hahn believed that the aim of the school should be to develop the character, and this could be accomplished through the following activities: 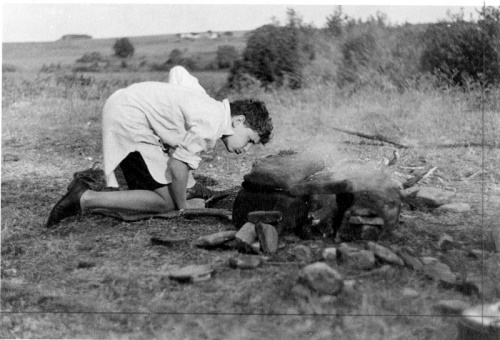 These activities, based upon the success of a similar programme at Salem, became at Gordonstoun an integral part of the curriculum.

In order to ensure that attainment in these activities was recognised in 1936 the Gordonstoun School Badge was established, subsequently becoming the Moray Badge in order that any boy living in Moray could take part. The Badge was based upon the first two activities – athletics, swimming and an expedition.

The standards of the achievement were graded according to age:

Within each age group the award was at two levels – Standard and Silver.

Prince Philip became a pupil at Gordonstoun in 1934, and in the autumn of 1938, he was one of five pupils who qualified for the Senior Silver Moray Badge. In order to achieve this he had to satisfy the appropriate conditions in the following six groups:

Kurt Hahn aimed to have his programme of character training accepted on a national scale, with each region being responsible for its administration.

The County Badge was also known as the “Fourfold Achievement” to reflect the four tests: athletics and swimming; an expedition test; a project test; a service test.

The second test was the expedition which could be walking, climbing, sailing, canoeing, cycling, riding, historical or exploring. 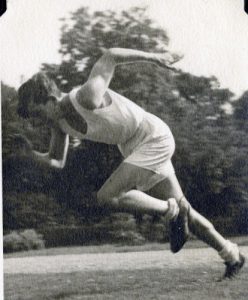 The third test was the project which could be, for example, the making of a table or a model aeroplane, the painting of a picture, a biological survey of a pond, a study of local farming methods, the translation of a manuscript, the making of a garden – there was almost no limit to the admissible variations. Each project had to be chosen by the boy himself, and be designed to demand care, precision, patience, forethought and good workmanship.

The fourth test was service. A boy could only be considered to have passed the service test if he had undertaken a period of service in a Voluntary Organisation.

All tests had to be completed within a year, during which candidates had to have maintained a good standard of health, and refrained from drinking or smoking.

In his address at the Annual Conference of the National Association of Physical Education, London in September 1941 entitled ‘The Badge’ Kurt Hahn said:

‘What else is achieved? There are a number of benefits. He will have a trained heart and a trained nervous system which will stand him in good stead in fever, exposure and shock; he will have acquired spring and powers of acceleration; he will have built up stamina and know how to tap his hidden resources. He may enjoy the wellbeing which goes with a willing body. He will have trained his tenacity and patience, his initiative and forethought, his power of observation and his power of care. He will have developed steadfastness and he will be able to say “No” to the whims of the moment. He will have stimulated and nourished healthy interests until they become lively and deep, and perhaps develop into a passion. He will have discovered his strength and have begun to cure some of his weaknesses.’

Kurt Hahn speaks only of ‘boys’ as candidates for the County Badge. He was in receipt of definite warnings regarding the overstraining of girls, and when asked to give evidence at an inquiry on the training of girls, said that he was awaiting the final verdict of the leading gynaecologists of the country to know to what extent athletic tests were sound. He preferred gymnastic exercises and rhythmic dances for girls instead of track athletics.

The County Badge Scheme was unfortunately launched at the height of the 2nd World War, and therefore did not survive in this form, despite it being considered an excellent form of pre-military training for young men.

However the Badge plan was introduced to a wider audience at the Aberdovey Outward Bound School, established by Kurt Hahn and Lawrence Holt when Gordonstoun relocated to Wales during World War II. It was Lawrence Holt’s intention to train those about to go to sea, under war time conditions, in seamanship. The courses were however only four weeks long, and the badge plan therefore had to be modified to form the Outward Bound Badge.

Prince Philip visited the Aberdovey Outward Bound School in 1949, and four years later became patron of the Outward Bound Trust. In 1954 Kurt Hahn consulted with Prince Philip, and a committee was formed to draw up an outline of what was to become the Duke of Edinburgh’s Award. A press announcement was made on the 22nd of February 1956, and six months later the Duke of Edinburgh’s Award Scheme was launched. 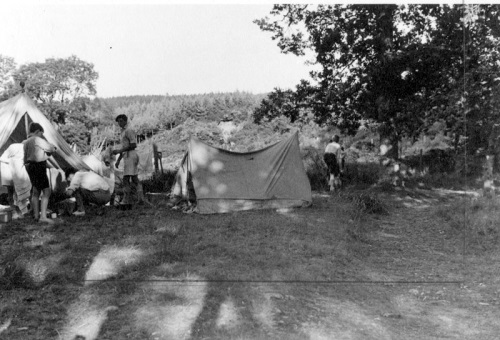 Extracts from the Gordonstoun Register, including information on Elgin Academy’s participation:

The Moray Badge was introduced about a year ago in order to encourage interest in athletics and general fitness,not only here in Gordonstoun but, it is hoped, m the whole County of Morayshire. Together with Elgin Academy, definite standards were decided on, these varying according to the age of the candidate.

(Junior under 14, Intermediate under 16, Seniors over 16.) The candidates had to reach these standards in throwing, jumping, running and swimming and to take part in a mountaineering, riding or seamanship, with the expedition lasting for at least two days.

In Gordonstoun, owing to an epidemic of German measles which prevented us visiting the swimming baths, it has not been possible for any boy—with the exception of two Juniors—to pass in all the groups, but at the end of term owing to the fact that many had passed everything with the exception of the swimming, badges were awarded on the understanding that the holders would take the swimming test at the earliest opportunity, and those who fail to pass return their badges.

Boys from other schools were involved, including Lhanbryde: 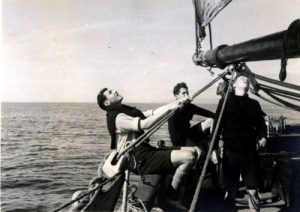 A number of boys from Lhanbryde have come to Gordonstoun in the Christmas term to train for the Moray Badge, and .a great deal of valuable training has been done.   After this term there can be no doubt that the scheme is a success, for one might have feared that athletics, which is really more suited to the warm days of summer than the biting winds of December and January, would have little attraction for boys, especially when the jumping pits were sometimes pools of liquid sand and when the cold made weight-putting and javelin-throwing particularly disagreeable.  Thus, in a report of their activities, the keenness and good spirit shown by the Lhanbryde boys must receive first place. What one first notices in looking over the records of this term ’s work is that those boys who came most regularly, though they were not necessarily the best athletes, made the most progress.